It’s been around for at least the 40 years I’ve been in business. I thought by now it would have gone away. But it hasn’t. 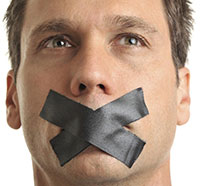 Just recently I was giving a presentation on branding when another speaker (a ‘communications coach’) came out with one of the most ludicrous myths ever to enter the sales and marketing arena.

According to this barmy idea , what you say isn’t that important. That’s because, according to this codswallop, our communication spectrum is split up into three isolated parts: voice, intonation and body language. In this ‘model’, the actual words we speak represent only 7 per cent (yeah, just a measly seven per cent) of our overall communication, while intonation (tone of voice, pitch, etc) represents 38 per cent, leaving body language the key influencer with a staggering 55 per cent of the total impact.

I get really wound up about this fable that gets perpetuated by people who don’t even have a modicum of intelligence to figure out just how stupid this whole pile of poo is.

So where did this notion first appear? Well, take a look at this guy. His name is Albert Mehrabian, a psychologist and researcher.

In 1972, Mehrabian conducted some experiments dealing with communications about feelings and attitudes, particularly those relating to someone saying they like or dislike something while at the same time giving the opposite impression by their tone of voice and look on their face. Let’s take an example: someone at work says to someone else: ‘No, really, I don’t have a problem with you.’ But the person who says it avoids eye contact like the plague, looks fairly anxious and their facial expression looks like a hen’s backside . Chances are then, it’s a lie.

But how specifically did the Professor carry out the research? Well, a set of subjects were asked to listen to a recording of a woman’s voice saying the word ‘maybe’ three different ways. One way was to convey liking someone, another neutrality, and another disliking. Subjects taking part were also shown photographs of the woman’s face conveying the same three emotions.

They were then asked to guess the emotions they’d heard in the recorded voice, look at the photos, and put the ‘correct’ ones together. In the test, the subjects correctly identified the emotions 50 percent more often from the photos than from the voice. In a further study, the subjects listened to nine recorded words. This time, three of the words were meant to convey liking, three neutrality and three to convey disliking. Each word was pronounced three different ways.

When asked to state the emotions being conveyed, guess what? The results showed that subjects were more influenced by the tone of voice than by the words themselves! Wow. What a brilliant scientific study – replicated, of course, thousands of times since. No, afraid not. Were men involved in the study, to get a gender balance? No, afraid not. Were other types of body language other than facial expressions included? Take a guess. 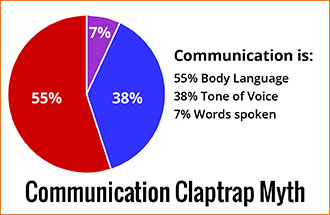 Nevertheless, based on the above, Mehrabian put forward the idea that in order for the person who said something to be trusted, his/her tone of voice and non-verbal communication would therefore have to be congruent (a posh word for ‘in agreement with’ or ‘in accord with’) to what was being said – and these parts of communication were actually much more important than the words.

Combining his theory with two previous studies in communication (if you’re that interested, ‘Decoding of Inconsistent Communications’ and ‘Inference of Attitudes from Nonverbal Communication in Two Channels’ published in 1967) the 7–38–55 ‘rule’ was born.

Since that time, countless presenters, speech trainers, marketers, sales people and Uncle Tom Cobly[1], have used this nonsensical concept as a major part of their rationale for the content of their speech/coaching/video/marketing/sales/etc, etc. These figures have become an all-encompassing set of ‘facts’ about the communication spectrum that has spread across the globe, being taught in many schools and universities. Can you believe it?

To be fair to poor old Professor Mehrabian, who has come in for a lot of criticism, he has stated that he never intended his results to be applied to normal conversation as a universal statement. He emphasised that these figures relate only to a situation where we are forming an attitude of whether we like or dislike someone.

But c’mon everyone. The idea that only 7 per cent of our communication is verbal under any conditions is quite ridiculous. How in the world can people promote this ludicrous idea? If it were true, I could learn Russian or Chinese in one evening. It would be a cinch, as pronouncing words wouldn’t really matter that much provided I used the right body language.

It’s true that sometimes the shrug of shoulders, the rolling of eyes or an extreme facial gesture can say a great deal without a word being spoken, but they must be seen in the context of the whole communication process that’s taking place. It’s not a catch-all principle, and was never intended to be.

Communications is about all three facets of communication – body language, intonation and words. In all of this, words play the greatest part, not the smallest.

So the only thing relevant when discussing ‘words don’t matter that much’ are the bozos spouting this myth for all to hear.

And they are the ones who definitely need to shut up.

[1]For my non-British audience, this is a way of expressing exasperation at the large number of people in a list. Check it out on Wikkipedia, https://en.wikipedia.org/wiki/Uncle_Tom_Cobley.