And the idea of using them in any kind of research involving cruelty makes my blood boil.

So a charity that campaigns in favour of using alternative methods in research gets my vote.

But sadly, one such organisation gets a definite thumbs down for their latest stupidity.

The charity known as the Dr Hadwen Trust for Humane Research has decided to ‘rebrand’.

It’s now calling itself Animal Free Research UK. And, surprise surprise, has a new logo to reflect the change of name. (We’ll get to that in a minute.)

Giving a reason to ‘rebrand’, a spokesperson from the charity said that research conducted with its many stakeholders revealed the previous Dr Hadwen name was ‘confusing and created a barrier between the charity and potential patrons.’

I would love to have seen that so-called research, because I can tell you now it would have been a pile of poo.

A group (we don’t know how many) of avid supporters decided that the organisation which they already contributed to wasn’t communicating well with potential new sources of income.

Did these simpletons debate over the fundraising plan and how to improve it? Nope.

Did they create a new communications strategy that would improve relations with target audiences? Not a chance.

What they did was…change the name of the charity (the worse thing they could have done) and commission the design of a new logo. As if that wasn’t foolish enough, they had the lamebrain notion that this was a ‘rebrand’.

They even go as far as saying, ‘the rebrand considers the charity’s brand equity and its history which is well-known and loved among supporters.’

Exactly why you shouldn’t have changed the name.

Let’s make it crystal clear. What they’ve produced is not a rebrand, because there is no such thing.

All they’ve had is…well…er…a new logo.

Claire Biscard, creative director at Spencer du Bois, the London-based brand consultancy that designed the new logo, says, ‘It’s a privilege to create a brand we absolutely believe in – something that has the potential to help stop animal testing forever. It needed to speak with complex and often opposed audiences – the scientific community and ethically driven consumers.’

I’m always amazed at how these agency folk can come out with so much banal drivel that attempts to rationalise their work. It only shows them up to know nothing about marketing, design or, dare I say, consumer psychology. And certainly sod all about branding.

As for the logo itself, the nice kind people at Spencer du Bois provided ‘significant pro-bono support to develop the new brand.’ 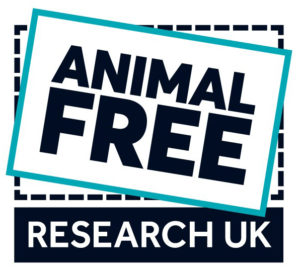 You what? Take a look at this new logo in all its glory. It must have taken the ‘designer’ at least two or three minutes to draw a box and put some type in it.

Give one of my assistants a free-reign in MS Word clip-art and she could have produced a better job in less time and with more thought.

Seriously, Emma? A square box covering a coupon in the background is ‘innovative and ground-breaking’? I think you need to get out more. And stop reading ‘the book of stupid’.

In fact, with the kind of thinking you appear to have, I’m wondering if it’s you that’s actually causing the charity’s problem with stakeholders in the first place.

Apparently, the deluded charity hopes the ‘rebrand’ will help with its long-term strategy to fund over £10 million worth of animal-free research each year.

That’s a challenging financial goal. But if they really believe that a change of name and a logo design that looks like something from the 1960s will work miracles, then the charity is in for a shock. ‘The new logo’, as one of my friends would say, ‘is as useful as a fart in a perfume factory.’

There is a better way. Create a brand.

I don’t mean a logo, or a  name-change, or a visual identity. I mean a proper brand. A full, complete, start-to-finish brand, based on evidence of what works. Not the gibberish and hype we hear daily from pseudo-experts who don’t know the first thing about what a brand truly is.

Of course, Animal Free Research UK  has no idea what I’m talking about, otherwise they, along with good old Spencer du Bois, would never have started down their pointless potty rebrand path.

Before I go and lie down in a darkened room, let me at least offer the charity one important piece of advice.

Go and put Emma on a ‘stop talking rubbish’ course. Do it quickly.

While she’s away, get yourself a decent director of fundraising who can communicate with all your audiences, whether they are the animal-loving public, or the scientific communities.

Someone who speaks with authority, purpose, clarity.

Someone who doesn’t need to commission a new logo design to promote the cause.

It doesn’t seem like you have anyone in your charity that fits the bill. The ‘senior management team’ consists of a science director, finance director, and good old Emma.

None of whom, it would appear, know how to solve a communication problem. Instead, they abdicated the whole issue to a design consultancy and had an unsightly logo drawn on a piece of paper. Job done.

The organisation claims that 1,000 of its supporters and key stakeholders say the new name and logo ‘does what it says on the tin.’ You think their uninformed view will make a dog’s turd of difference to your fundraising?

I did some consultancy work with the late Dame Anita Roddick in the late 1970s. Through her Body Shop concept she pioneered the sale of 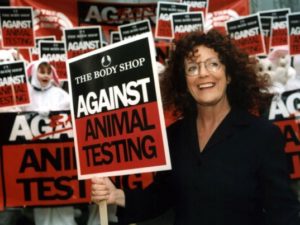 cruelty-free beauty products. Anita grew the business from a single outlet in Brighton, wedged between two funeral parlours, to an empire worth £652m when sold to L’Oreal.

Funny that she never needed to ‘rebrand’ because people didn’t understand what the Body Shop was all about. After all, the name says nothing about our furry friends. Nor does the logo suggest anything remotely connected to research of any kind.

Yet the whole issue of being against animal testing was a fundamental part of the brand’s purpose and rationale.

Dame Anita didn’t need to change the name or the logo. Why would she? The brand was powerful, direct – and pretty much everyone on the planet knew exactly what the brand stood for.

The Dr Hadwen Trust for Humane Research had absolutely no need to change its name either. Or its logo. Blaming these elements for creating a ‘barrier’ to winning new supporters is absurd.

Because, despite their poppycock passing as research, their name and logo weren’t the problem.

The senior management team were. And probably the trustees too, in falling for the hornswoggle.

I’m gobsmacked that an organisation funding other people’s research to the tune of millions doesn’t even know how to conduct its own, or is intelligent enough to seek proper professional advice on how to solve its communication problem.

Maybe I shouldn’t be so surprised. Insufferable brand babble is alive and well, and is used to cover up a multitude of gaffs, misconceptions and crazy ideas by those who know next to nothing about the subject.

As the irreverent Bob Hoffman says, ‘In today’s world of marketing, delusional thinking is not just acceptable, it’s mandatory.’

Sadly, it appears just as bad in the world of not-for-profit organisations too.