James Hammond, The Brand Doctor says:
If you don’t know what a brand is, you can always design another logo. 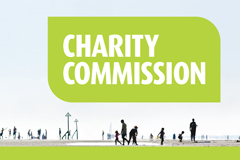 I am a great supporter of the Charity Commission here in the UK.  But some fruitloop in the organisation recently determined that the ‘old logo and brand’ that you see here didn’t reflect the ‘new’ approach of the Commission, whatever that happens to be.

Given that no-one at the Charity Commission, it seems, even understands the difference between a brand and a logo, I’m not surprised that choosing a new design was achieved by, of all things, holding an internal competition for ideas. Of course, that’s the professional way to develop a design strategy – or even a brand identity, right? Wrong. Such folly like this is akin to asking the staff of a supermarket the best way to perform a triple bypass operation – and then feeding the results to the surgeon.

Apparently the shortlisted entries were used ‘to guide the look and feel of the new logo which was agreed and signed off by the senior team.’ Ha, ha, ha. Senior team? Of what, I might ask? Design experts? Corporate Communications professionals? Methinks not. But clearly a bunch of twerps when it comes to understanding brands and branding.

In fact, the new logo and ‘brand identity’ as they describe it was created by an in-house team at the Ministry of Justice called Design 102. I don’t know how much notice they took of the shortlist before slinging it into the waste basket but we’re told it cost £5,000 to produce the logo and accompanying ‘brand identity’.

You want to see this exciting new, staff-led, in-house-team-generated masterpiece? Well, here it is. Yep,it’s a crown. And not dissimilar to most of the crowns featured in logos of other government departments. If you do a search on Google for ‘royal crown vectors’ you’ll find hundreds of free files containing crown clipart. Each one can be downloaded and modified quite quickly by the most basic designer to imitate the Commission’s new logo. (An hour in Adobe Illustrator would be more than sufficient time to render it.)

The Charity Commission smugly states that the five grand design budget ‘compares well to other Departments and businesses – and even charities themselves!’ Nice spin, guys. But then they go on to hit you in the face with the fact that ‘there will be some additional costs in ordering new signage, letterheads and other materials such as pull-up banners but we have kept these as low as possible by using up our old material before we order new.’

Anyone in the design profession knows that things don’t all run out at the same time. So unless you’re going to put supplies of the old stuff in the skip, you’ll be confusing the hell out of everyone by actually using two different logos on two different sets of stationery simultaneously. But hey-ho, don’t worry. According to William Shawcross, chair of the Commission, there’s another in-house ‘project team’ that will sort out this mess. (I bet their overhead wasn’t included in the £5,000.)

Now to be fair, the old logo does look more like the cover of a tourist brochure for a deserted seaside resort. To understand how it ever reflected the work of the Charity Commission, which registers and regulates charities in England and Wales, you’d need powers beyond any human capacity.

But the new logo, according to the Commission, ‘represents us as a more efficient and effective regulator’. Err…but guys, seriously? It’s just a crown. Like lots of other crowns. It doesn’t represent anything distinct whatsoever. And it sure doesn’t reflect efficiency and effectiveness.

Departments as diverse as HM Prison Service and HM Revenue & Customs could easily be mistaken for the Commission as their logos are strikingly similar, as you can see here.

Ah, you cry, the logo is accompanied by the name of the regulator! Well, that simply makes the crown redundant, doesn’t it? After all, where’s the connection? What new approach is reflected in this crown? What does it have to do with charities? Why are we here?

Maybe I’ll get my associate company Motive to add some additional comments to this brand blog, just to highlight the sheer senselessness of this entire exercise. One that was determined by people who don’t know what they are talking about, getting workers who also know nothing about logos or brands to spearhead the project, then leaving it all in the hands of a bunch of in-house people who, let’s face it, haven’t exactly created a world-class solution to the logo fiasco.

If this isn’t a case of the Emporer’s new clothes, I don’t know what is.

I will still continue to support the work of the Charity Commission. But as for this logo farce, I consider it half-witted, meaningless hogwash.

And that’s about as charitable as I can be.